We love sharing information about our partners and letting our friends get to know them better! This week we are highlighting the Canadian Guide Dogs. They have returned again this year to host a fundraising rain barrel sale.

The National Training Centre for Canadian Guide Dogs for the Blind is located in Manotick, Ontario; a village in the southern part of Ottawa.  Their annual fundraising rain barrel sale is one of numerous fundraising events held throughout the year.  Rain barrels are $55 each and can be ordered online at www.RainBarrel.ca/GuideDogs

Here, we feature the story of one of their clients, Gillian, to demonstrate the importance of Canadian Guide Dogs for the Blind. 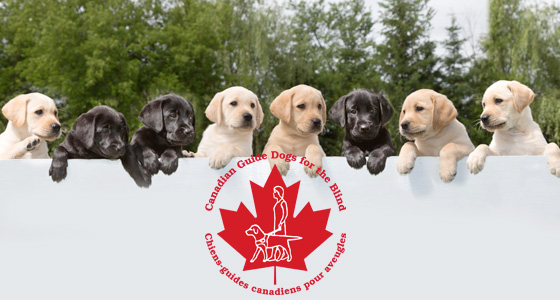 Gillian was born with low vision, but it was not until her mid-thirties that she was diagnosed with retinitis pigmentosa, commonly referred to as “R.P.”

Genetics can play a large role in developing R.P., but in Gillian’s case nobody else in her family has it.  Gillian isn’t able to pinpoint a specific day or year when she realized she was blind.  It was a very gradual process of her vision deteriorating.  Her first guide dog made the transition of vision loss much smoother.

Gillian and Favor were matched in April 2011, but it wasn’t her first time being trained with a guide dog.  “I’ve had two excellent dogs from Canadian Guide Dogs for the Blind in the past”, says Gillian.

Overall, Gillian is a very confident person, but since receiving her first guide dog, that confidence level has grown.  Having a guide dog has enhanced Gillian’s mobility and life and enabled her to have a more ‘regular’ life and routine.  Prior to having a guide dog, Gillian says, “I stopped going out between 10-2 during the day because of the bright sun.  Sounds transmit louder during rainy nights and I also wouldn’t go out in the evening, especially if it was raining.  The snow and the dark deterred me from going out.  With a guide dog, I have no restrictions.”

As with Gillian’s past two dogs, Favor assists her in crossing the road in a straight line and finding the curb at the other side.  Favor will also negotiate faster than Gillian can, as the dog will see ahead and make proactive decisions, rather than reactive.  “If I had a white cane, it would slow me down.  With a dog, I can maintain a good speed”.  In addition to the mobility enhancements, Gillian says her life has been brightened by having her dog.  “A dog is always happy to see you and doesn’t judge you.  You are forced to be outside often in all seasons and you learn to appreciate nature and become a more patient person”.

Gillian traveled from her home in Penticton, B.C. to train at Canadian Guide Dogs for the Blind.  Although she had gone through the training course with her past two dogs, it was a good refresher.  “Although I have never driven, it’s like a driver taking a retraining course to break bad habits.  It would be like forgetting to signal, checking your mirror or coming to a complete stop.  Guide dog users develop bad habits too that need to be broken”.  It was also important for Gillian to spend time developing a bond with Favor, so she feels as confident with her as with her past two guide dogs.  “Without Favor I would be on shaky ground.  I would be much more frightened crossing roads, more clumsy and bumping into more things.  In losing your vision, you lose trust in yourself and in others.  With a guide dog, we build mutual trust so that she can provide mobility, confidence and companionship”.

Gillian’s entire outlook is a positive one.  Despite being blind, her world is full of ‘vision and colour’.  “People think when you’re blind you see nothing but blackness.  Perhaps, I do, I don’t know.  My other senses are enhanced, and I see everything through my memory and imagination.  Because of my guide dogs, my life has taken a different route.  I am happy all the time”.Gillian applied to Canadian Guide Dogs for the Blind, for the first time, after observing a friend’s experience with a guide dog.  Gillian has been pleased with the service she’s received.  Now, working with Favor, her third guide dog, Gillian says, “I returned to Canadian Guide Dogs for the Blind based on the organization’s reputation.  The staff were very good at explaining things to me, and they are friendly and informative.

To learn more about the Canadian Guide Dogs you can visit their website: www.guidedogs.ca OR you can support them by purchasing a rain barrel from their 2013 fundraising sale: www.RainBarrel.ca/GuideDogs