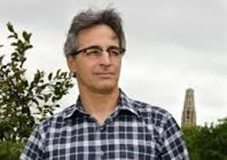 Larry was nominated by the Council of Canadians Hamilton Chapter. He was selected by Volunteer Hamilton from among 44 nominations.

Larry  has been a dedicated, reliable volunteer member of the Hamilton Chapter for the past 2 ½ years since the Chapter was re-activated. He has provided leadership to the organization by assuming responsibility for Co-Chairing the Aerotropolis Group throughout 2012 and 2013. In this capacity he actively engaged in fundraising and communication to support the work of Hamiltonians for Progressive Development and Environment Hamilton as they participated in the Ontario Municipal Board hearings in the fall 2013. Since July 2013 and until the present, Larry has also Co-Chaired the Direct Democracy Group and provided energy and leadership to that Group as they have continued to work to promote a greater understanding of the concept and practice of direct democracy as well as foster the development of a greater degree of direct democracy and civic engagement in the Hamilton Community. The Direct Democracy Group has tremendous potential to offer alternative solutions to representative democracy and to place resident decision making power and government accountability as cornerstones of our political system.

Larry’s previous community work demonstrated his commitment to community development in Hamilton. In 1996, he won a recycling contract with the former Wentworth County School Board. He developed a colour-coded recycling sorting system for the schools which permitted an elementary school of 300 students to reduce their garbage to one bag per week and to remove their dumpster bin from the property. As a result, he was a finalist for a Waste Minimization Award through the Recycling Council of Ontario.

In 1997, Larry founded Earth Day Hamilton (EDH) and led the organization for 12 years before stepping down as Chair. EDH provides unparalleled environmental learning opportunities for students by getting them out into nature and in front of seasoned experts. Upwards of 60,000 students and their teachers have enjoyed free access to this extraordinary level of environmental education. EDH has also grown to become the premiere tree planting organization in Hamilton. The annual tree planting festival has restored shorelines, created forest buffers, protected beachfront sand dunes, involved thousands of volunteers and planted tens of thousands of trees, shrubs and grasses. He continues to serve EDH as a Board member.

In 2009, Larry was a founding member of the Hamilton Civic League (HCL) and has fulfilled the role of Chair of the Board since its inception. HCL began by focusing on increasing voter turnout and has expanded to keep residents informed about important local issues. While simultaneously heading up the Aerotropolis Group, under the banner of the Hamilton Chapter of the Council of Canadians, HCL initiated a program to knock on every door within the Aerotropolis to survey residents’ opinions on the City’s rezoning plans. They hosted a garbage rally when Hamilton City Council rejected bi-weekly garbage collection contrary to the recommendations of the Waste Reduction Task Force. HCL setup the Fluoride Free Hamilton website to allow residents to register their opposition to water fluoridation. HCL under Larry’s leadership initiated CityCam which permits residents to watch, listen, comment and vote in real-time alongside City Council. HCL currently has a community-wide Values & Priorities Survey underway and will produce a 2014 Councillor Report Card based on the survey results.

Through Larry’s business activities with RainBarrel.ca, he has assisted hundreds of non-profit groups to raise funds for their local initiatives through truckload rain barrel fundraising sales.

In summary, Larry Pomerantz is an energetic, dedicated, reliable volunteer who leads by example in his volunteer capacity. He goes far above and beyond the norm of regular volunteer duties. Larry has made a special impact in the Hamilton Chapter of the Council of Canadians AND the local Hamilton community through outstanding volunteer effort over the past 18 years (1996 to the present). In addition to his contribution to the CoC Hamilton Chapter, his work with Earth Day Hamilton, the Hamilton Civic League and the non-profit community has been exemplary and deserving of recognition.

This is National Volunteer Week. Thank you to all the members of the CoC Hamilton Chapter! It is your volunteer efforts that make our social justice work possible.

*Originally published in an email by Kathie Clark