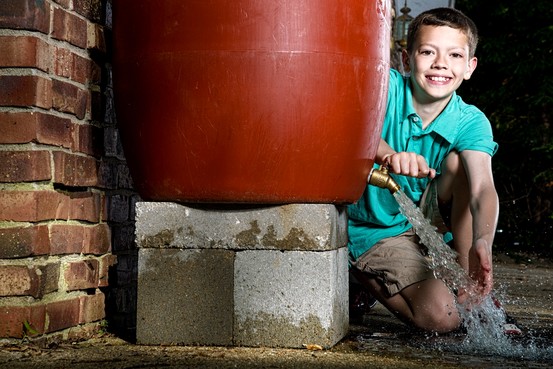 This is 11-year-old Jacob Tallman. He saved up his $5 a week allowance to buy a rain barrel for his garden. You can read the original article written by the Wall Street Journal by clicking here or see below in this post.

Do you know any young gardeners? Share a picture of them using a rain barrel (or just helping in the garden) and it could be featured in one of our upcoming blog posts!

You can email your picture* with a short description to Lindsey@RainBarrel.ca.

*By submitting your photo you are agreeing to allow us to use your picture in an upcoming post. Those chosen will be notified.

How an 11-Year-old Spent His Allowance

With a little extra yard work, Jacob Tallman earned enough money to splurge on a treat that doesn’t show up on many 11-year-olds’ wish lists—a rain barrel for his backyard vegetable patch.With more than three months of earnings from clearing weeds, gathering fallen sticks and taking out the dog, Jacob was able to buy a $120 rain barrel. The barrel, made by Circle City Rain Barrels, in Indianapolis, holds 55 gallons of water and was delivered and installed last week.Jacob financed the purchase with $70 in allowance savings and about $50 of birthday money. The rain barrel gives the young gardener, a fifth-grader at Center Grove Elementary School in Greenwood, Ind., some ecological street-cred.His parents, Heather and Matt Tallman, a freelance food writer and a radiology engineer, have helped fuel Jacob’s interest in gardening. In April, Mr. Tallman, 40 years old, built a raised bed, 3 feet by 6 feet, where Jacob has planted herbs, tomatoes and squash.Earlier this month, Ms. Tallman, 37, took Jacob to a garden show, where he noticed rain barrels for sale. “I thought it would be cool to use rain to water my plants,” Jacob says. He told his mom he wanted to buy one with his savings and ordered it at the show.Jacob earns $5 a week doing chores. The Tallmans say they are careful in what they assign. “We don’t reward him for things that he should be doing on his own anyway,” she adds—things like picking up his room, folding his own laundry and cleaning up the bathroom.            The Tallmans live on a woodsy, 2½-acre property in a suburb of Indianapolis. His assigned chores usually involve yardwork. No matter the season, “there is always something outdoors to do,” Ms. Tallman says. That means clearing snow in wintertime, sweeping the deck in the spring and picking up buckets of acorns in the fall. “It helps alleviate the work my husband and I have had to do all these years,” Ms. Tallman says. Jacob keeps his money in a clear-plastic coin-counting container. Friday is payday.            If a job was particularly well done, or if Jacob had a good week at school and was generally cooperative at home, Ms. Tallman says, she contributes an additional $5 to an iTunes account. Jacob purchases books to read on his iPad, such as those in the “Percy Jackson & the Olympians” series by Rick Riordan, or tunes like “Chasing Pavements” by Adele. But that bonus is also “a privilege I can—and have—taken away,” Ms. Tallman says, whether for not listening or resisting doing his homework.Jacob saves the vast majority of his earnings. Over the Christmas break, he was able to buy a Dell Inspiron desktop computer for his bedroom for $400. As a result of the rain-barrel acquisition, his savings are currently down to $20. But Jacob is already thinking ahead. “Next I’ll probably save up for a car or start a college fund,” he says.